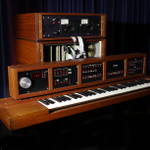 Welcome to the sounds of the incredibly rare Synclaiver Model 1. Built in 1978, this instrument was the very first commercially available digital synthesizer. Only 13 units were built, before the much more widely known successor, known as the Synclavier II, was introduced.

The first model could create sounds with additive and FM synthesis, allowing for a wide range of sounds. Because system software was required to load at startup from a floppy disk, programmers at several university research labs thought of new and ingenious ways to use the hardware which greatly expanded the creative possibilities.

The following excerpts from various compositions by Stefan Schramm give a good idea of the sound, but can certainly not come even close to describing as to what is possible on this instrument.